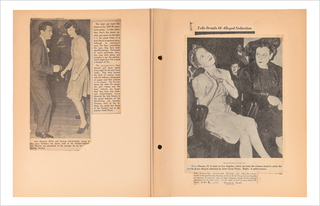 Daniel Aaron kept this scrap book from 1937 through 2011. "Few things are sadder than the truly monstrous," wrote the novelist Nathanael West, a quotation that Dan claimed was a good summary of this compilation of pictures and newspaper clippings that haunted, horrified, and amused him. In an extended interview with Noah Feldman and Hillary Chute, added to the facsimile of the original artifact, Aaron reflects on his long, complicated relationship with American culture. The Scrap Book, originally published in the format of a newspaper by Pressed Wafer, is out of print; remaining copies may be obtained from the owner of this website.