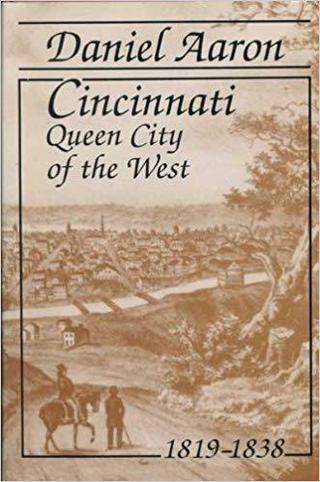 Daniel Aaron's 1942 dissertation, supervised by Howard Mumford Jones, was the first submitted in the newly established American Civilization Program at Harvard University. It remained unpublished for 50 years, during which time it became, in the words of Carl Abbot, the author of the preface to the book version, "an interlibrary loan classic." The impetus for his dissertation came, recalled Aaron, from his study of de Tocqueville's Democracy in America. His hope was that the study of a relatively confined sample such as Cincinnati would allow him to test de Tocqueville's generalizations about American character and institutions.

Aaron spent two very hot summers working in the library of the Historical and Philosophical Society of Ohio (now the Cincinnati Historical Society) as well as at the Public Library of Cincinnati and Hamilton County, "tropical ordeals," as he later confessed. The finished work was accepted without request for revision and without enthusiasm, as he wryly noted.

But such retrospective self-deprecation belies the fact what a bold work even Aaron's first major scholarly effort was. Extolling the unflappable optimism of the early Cincinnatians, Aaron demonstrates how values such as mutual aid and cooperation helped them survive financial crises and natural disasters even as they forgot to plan for the "contigencies which awlays accompany social and economic progress." In developing his famous frontier thesis, Frederick Jackson Turner had lumped the rural and the urban West together, ignoring the importance of communities such as Cincinnati in the formation of American identity. Turner's theory had emerged from "a chorus of self-congratulation" rather than solid analysis: "Studies of western urban communities during the first four decades of the nineteenth century should, I think, modify many stock conclusions about the West and its culture and perhaps dispel some illusions of the romantically minded."