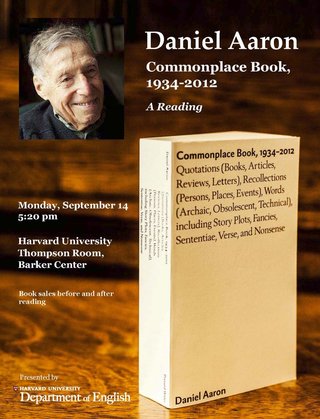 Commonplace Book was Aaron's last publication, a selection and condensation of passages and poems from journals he had been keeping since the 1930s. A kind of intellectual autobiography, the book also established Dan as bemused chronicler and sharp observers of his contemporaries, from Upton Sinclair and Lillian Hellman to Richard Hofstadter. The late poet William Corbett originally published it as part of his famous Pressed Wafer imprint. Dan took an active part even in the design of the book, which he wanted to be as plain as possible, including the cover, intended to mimic a dictionary entry. Commonplace Book is now out of print; remaining copies of may be obtained from the owner of this website.