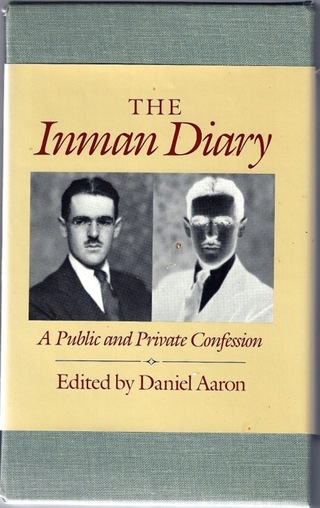 The Inman Diary was perhaps Daniel Aaron's most unusual assignment. Inman (1895-1963) , an unsuccessful poet originally from Atlanta, was a reclusive hypochondriac who spent the better part of his life holed up in an apartment in Boston's Back Bay, paying legions of men and (more frequently) women to come and share their life stories with him, which then distilled into the most monstrous diary (17,000 words!) ever written. Seething with prejudice, Inman was not an impartial observer, and his voyeurism is more appaling than appealing. Yet Aaron, commissioned by Inman's family to condense the diary into the two volume version Harvard University Press published in 1985, recognized that Inman's most enduring creation was Inman himself, a character of Joycean proportions: this was the great literary achievement that had eluded Inman when he set out to write poetry.

Aaron's own achievement as an editor was not limited to the enormous work that went into the editing and cutting of Inman's manuscript. The interpassages he wrote to connect the entries in Inman's diary are literary vignettes in their own right. Here is his description of freckle-faced Kathy Connor, the daughter of Irish immigrants, one of Arthur's most loyal "informants," taking leave of him at Arthur's funeral (he had shot himself earlier in the week).  This is the one moment of affection and human contact in the journal that Arthur had not asked or paid for, all the more poignant because he is no longer around to appreciate or to record it: "The body lay in an open casket, and before the funeral began, Kathy had an hour alone with Arthur. She had seen lots of corpses at wakes, but she wasn't prepared, she says for the sight of Arthur. 'Joseph, Mary and Jesus,' she siad, 'what have they done to you?' The Arthur who loathed perfume and powder and who more than once had ordered his girls to scrub the paint off their faces was gussied up with cosmetics. If made her laugh and cry. She told him he looked terrible, She reminded him of her promise not to abandon him--and straightened his tie. As she got rady to leave, she spied a bit of blood in his ear and removed it with a moistened corner of her dress."