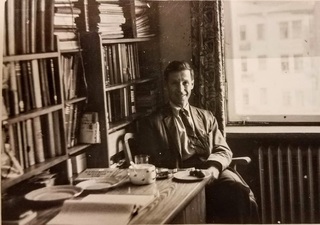 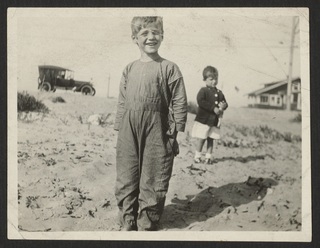 Raleigh Regained: Or, How Professor Aaron Learned to Worship His Bike 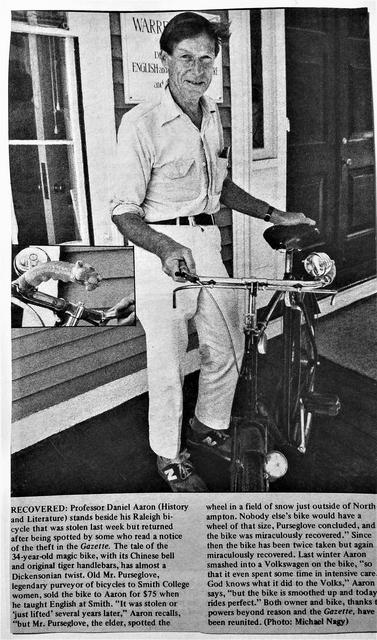 Well into what he jokingly called his dotage, Daniel Aaron remained an avid cyclist. He loved his old Raleigh bike, a constant companion in both his Warren House office and Barker Center offices. For him, the Raleigh was not a mode of transportation but a way of life. Acquired in Northampton, at the end of World War II, from a dealer in bicycles with the improbable name of Purseglove, the Raleigh was one of Dan's most cherished possessions. Adorned with Tony the Tiger handlebars ("Put the Tiger in Your Tank"), worn down to an indistinct yellow so none of their kitschiness remained, and an oversized Chinese bicycle bell that made an earsplitting sound, the Raleigh was, in Dan's eyes, a thing of beauty—and, as it turned out, also in the eyes of others. It was stolen several times, once in Northampton, where the redoubtable Purseglove spotted it in a field of snow, and at least once, around 1978, in Cambridge. The Harvard Gazette ran a note about the theft, a reader located the bike soon after, and the Raleigh and his grateful owner were reunited. The Gazette published another article, celebrating both the reunion and the role it had played in making it happen, and included a snapshot of a beaming Dan, looking, as he always managed to do, both rumpled and stylish in shirtsleeves, khakis, and New Balance sneakers, keeping a firm grip on the wayward bike. Evidently, the photographer was so captivated by the tiger handles that he photographed them separately and inserted a close-up into the portrait. Dan kept the clipping with his papers. As for the Raleigh, at some point in the late 1990s or in early 2000, it was stolen for good (or, rather, for bad).

Arguably, Dan himself hadn't always treated it well, smashing it more than a few times. But each time, after the requisite repairs had been made, Dan got right back in the saddle. After one such accident—this one took place on Mount Auburn Street—the wrote a note in his journal, in which he compared himself to Elpenor, Odysseus's hapless friend, who, drunk out of his senses, fell off Circe's roof and promptly severed his neck. "A hint from Him," Dan wryly noted about the experience. The observation made it into his Commonplace Book (p. 351).

In fact, Dan was a proud non-believer. I remember one particular lunch in the Senior Common Room of Leverett House during which the conversation, for reasons now lost in the fog of time, had turned to the afterlife. Everyone was weighing in with their own complicated views—everyone but Dan, that is, who was kept chewing (extra-noisily, I thought) on his salad. When the person next to him, who had always annoyed hm, pivoted to Dan and asked cheerily, "So, Dan, what do you think happens after your death?", Dan, stabbing his fork into the house salad, snapped back: "I happily contemplate the fact of my own imminent and complete annihilation." Now there was a conversation-stopper.

Religious he might not have been, but Dan, in his own idiosyncratic way, was actually quite a bit superstitious. He once told me that in college he kept a little altar in his room, where he regularly prayed and offered symbolic sacrifices to an array of personal gods (among them was, if I am not mistaken, the God of Dating). No wonder that his resilient Raleigh bike, miraculously retrieved every time somebody tried to make away with it, had begun to seem somewhat altar-worthy to him, too—so much so that he decided to make fun of himself. The Commonplace Book contains the plot for a children's story, never written ("Story Idea," pp. 305-306), in which an "emeritus Professor" laments the dismal condition of his old Raleigh bike ("positively dangerous to ride"). One night, seized by "some strange impulse," the professor goes down into his basement to take another sad look at the dying bike and finds it wonderfully, beautifully, "glitteringly" cured. When he rides it again, perfume sprays out of the bell, and music emanates from the brake.  (Remember that, in Milton's Paradise Lost, "ambrosial fragrance fill'd / All Heav'n" when God speaks, Book 3, 135-36). Confused, the professor stops at a Mass. Ave watering hole to fortify himself, an opportunity seized by a thief who happens to be passing by and is no doubt attracted by the aura of the restored but unsecured bike the professor had left outside. The thief hops on it, but before he can make his escape, tbe bike, which can now talk, too, cries out: "Stop this thief! He's stealing the property of my Master!", alerting both the professor inside the bar and a conveniently located, nearby policeman.

Ashamed of his unbelieving ways, the professor repents. Devotees travel to his house to pray to the wondrous bike, which reciprocates by performing "some modest miracles" for those who need them. And the old professor, having at long last found God in the form of bike, dies in peace, kowing that his precious, perfume-wafting Raleigh "will be enshrined in the Bow Street church" (maybe a reference to St. Paul's Catholic Church, corner of Bow and Arrow Streets in Cambridge). Now Dan didn't die that year (in the Commonplace Book, the story is dated 1978), and he wasn't yet retired either. But Dan's Raleigh story is clearly autobiographical, suggesting--in a way that's both completely facetious and utterly serious—that if there's one God that Daniel Aaron could get behind, it would be his old bike. People have, as Dan would remind us were he still here, worshipped worse gods.

Thanks to John Bethell, Katherine Powers (from whom I stole a pun), and Raphael Falco for their help with this story. Dan's Commonplace Book is out of print; remaining copies can still be acquired from the owner of this website through the contact form. 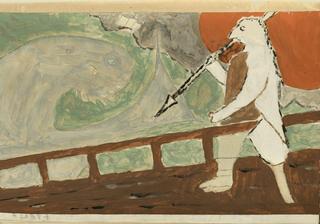 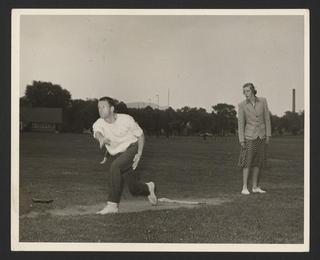 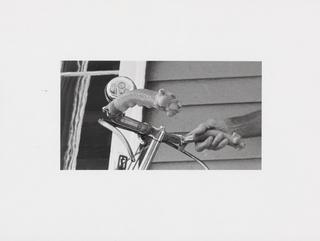